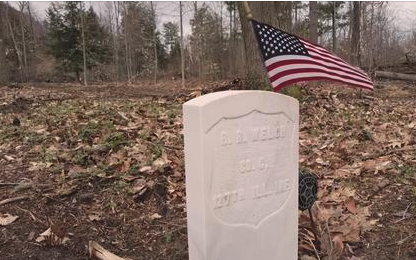 The Glen Arbor Township Cemetery is receiving a facelift, and it has a lot of history to share.

The cemetery was sold about 50 years ago in the land sale of Sleeping Bear Dunes National Lakeshore but local historians say it should have never been part of the sale.

Now, they’re working to make sure the cemetery’s history is never forgotten.

“In the early days in Michigan, every township was required to have a township cemetery, and you can’t sell a cemetery if you’re a township and you’ve used it,” said Andrew White, a Local Historian.

The first burials at the Glen Arbor Township Cemetery happened in 1879.

Two sailors who were on a schooner that wrecked in Glen Arbor were buried here, but their graves are not marked.

“When somebody was buried in our cemetery in Glen Arbor, they took a shingle, wrote the name of the person on the shingle, and stuck the single in the ground where he was buried because they couldn’t maybe afford a tombstone,” said White.

Only 13 graves are still marked. Glen Arbor Township regained ownership of the Cemetery a couple of years ago, and local historians began piecing together the puzzle of who is buried.

“We have established by looking at old newspapers and records that there are 50 burials there,” said White

Glen Lake 8th graders are helping in the effort by taking the information gathered by local historians to write about who the people buried here.

“I have been researching Burr Parker. I have learned that his occupation was a lumberjack,” said Miles Wright, 8th grader at Glen Lake Middle School. He also had nine siblings, but he died of excessive alcoholism because he was on a spree.”

“I have Joseph Franklin Todd. I learned he was born in 1827 and died in 1874 from suicide,” said Scarlett Vanderlinde, 8th grader at Glen Lake Middle School.

The historians say this project will be beneficial for generations to come.

“I think this project is important because we get to study these people who lived a while ago,” said Wright. “It’s fascinating to learn about the history of what they’ve been doing, like what life was like in Glen Arbor back then.”

The papers glen lake students write will be kept at the Leelanau Historical Society Museum and Empire Museum.

This summer, ground radar imaging will be used to see exactly where people are buried at the cemetery.